I recently came across some suspicious code in Square’s Okio:

Their comment admits it’s nuts, and points to Java Puzzlers, which I wasn’t aware of. Apparently I’m out of touch since this has been around since 2005, and the technique is used in many open source libraries (search around).

I had two questions: 1) how does this work (!?), and 2) why would you ever do this? Checked exceptions are a huge pain, but outright circumvention seems extreme.

Here’s some code illustrating what sneakyRethrow allows one to do:

This compiles, but the downcast throw (Error) t; line in doesntWork isn’t safe for most cases. There’s no guarantee you can cast an arbitrary Throwable to Error. Here is Java’s exception class hierarchy, pinched from here, with unchecked exceptions in red: 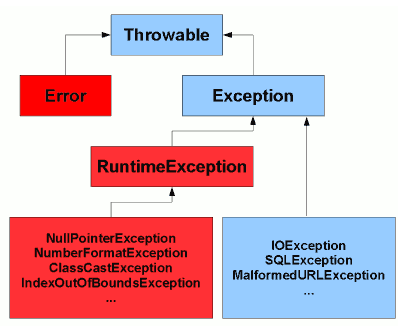 Running the code demonstrates the problem with the naive doesntWork, and also shows sneakyRethrow doing its thing:

At this point I still didn’t know how this was possible. I read the relevant section of Java Puzzlers, but it didn’t really explain the full details of the hack, imo. One important thing it did make me aware of was this: checked exceptions are only part of Java, not the JVM. They’re only enforced by the compiler. In bytecode you can happily throw any exception from anywhere, without restrictions. Time to look at the bytecode (via javap -c Test):

Looking at this bytecode it’s obvious why doesntWork causes a ClassCastException but sneakyRethrow doesn’t: there’s no checkcast instruction in the sneakyRethrow code path. How is this possible? sneakyThrow2 “clearly” casts the Throwable to T (which is Error) in this line: throw (T) t;. Then I clued in. Another compiler-only feature is being exploited here: generics. At runtime all the generic type information is “erased” – it’s not in the bytecode. So throw (T) t; effectively becomes throw t; (no cast), and the resulting bytecode shows this. Contrast this with doesntWork where I’ve had to explicitly cast the Throwable to Error. Nothing is erased and we get bytecode with the checkcast that leads to our ClassCastException.

Now, when would be a good time to use sneakyRethrow? Don’t use it! You agreed to use Java, pay the tax and do the right thing with checked exceptions. But then why has this code shown up in various respected Java projects? The one use case where sneakyRethrow seems to be accepted is when you catch Throwable (i.e. the most generic type of exception), do a bit of cleanup, then want to rethrow the Throwable as its most specific type. It’s well explained in this Android platform code. I’ll reproduce here for posterity:

So, like the comment in Okio says, using this in cleanup code is pretty convenient. Neat hack.